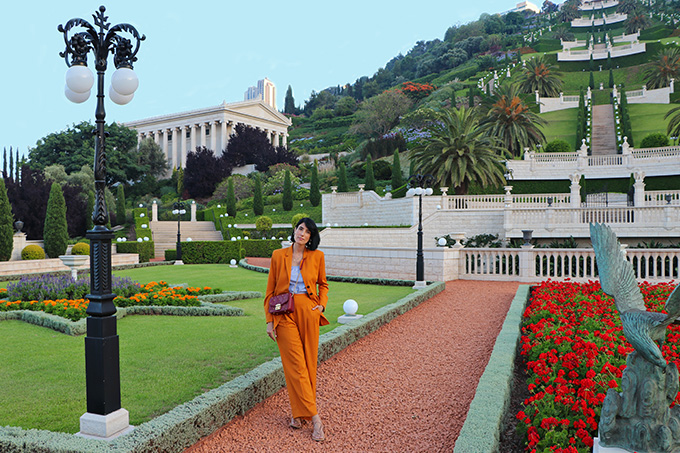 FORGIVE ME HAIFA FOR I HAVE SINNED

Or: How did I not see this coming?

Forgive me Haifa, for I have sinned. I was always sarcastic and never gave you a fair chance.

Well, you know how it is… Eye rolls and eyebrow raisings in response to rumors of “something cool that’s happening in town”, are like a national sport to us Haifa natives. Isn’t that so?! ;-)

Similar to most of my friends, I too left Haifa in favor of “the city that never stops” about twenty years ago. Since then, my visits to Haifa have narrowed down to Friday night dinners with my family and watching videos of wild boars chewing up public playgrounds. But 24 hours in your company, made me realize that you’re basically what other cities aspire to be like – you have a female mayor (!), public transportation and commerce that is active on Saturdays, true coexistence, recreational and leisure culture… And wow! You are absolutely beautiful! 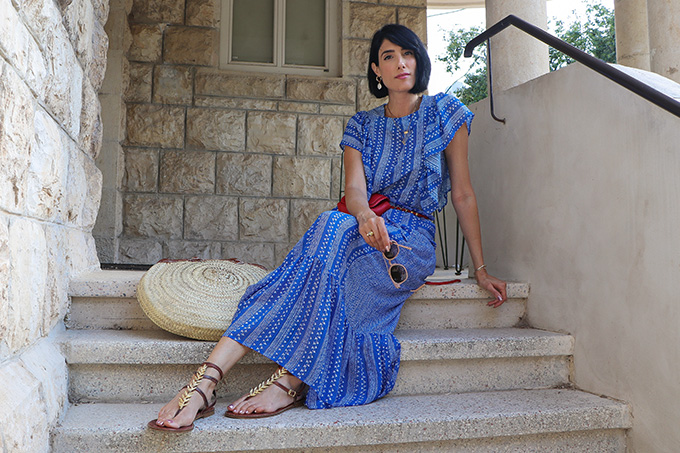 So what happened, you ask? Shiri Wizner happened!

Shiri Wizner – a talented content creator, entrepreneur and proud “Haifan” (who was actually born and raised in central Israel – go figure), has been turning – over the past few years – every stone in town and spreading the unique stories she collected and photos from “another universe”, throughout the web.

Shiri and I clicked immediately when we first met, and as time went by – she continued to stir my curiosity as to what’s going on in the northern city. Some of you might remember that back in December, I traveled – on a rainy winter day – to a Makers tour of Haifa’s lower city, guided by Shiri. An experience I strongly recommend! 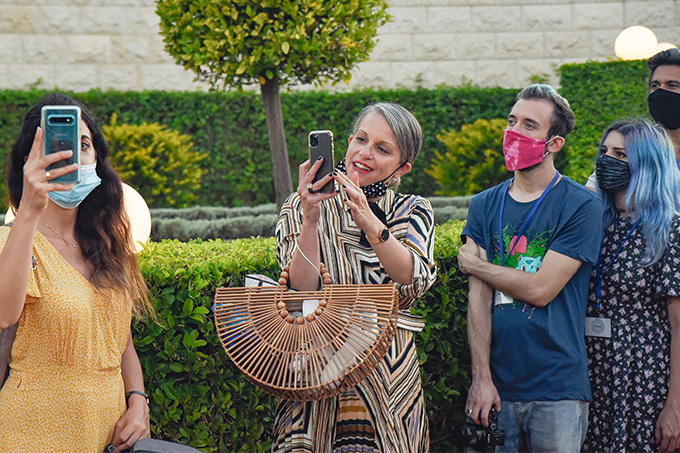 So over the last weekend, sponsored by the disabled airspace and Haifa’s Municipality’s blessed desire to promote domestic tourism, and help hotels and local businesses recover from the Covid 19 crisis. And so, Haifa’s tourist board launched  the “arrive by day and stay for the night” initiative – a special promotion for the summer months, which offers visitors who book a night’s stay at one of the city’s selected hotels free tickets to special attractions. Urban tours, culinary tours, kids’ activities and much more.

The clever folks at the Haifa municipality, were wise enough to appoint Shiri as an ambassador, and she in turn (as only she can) – persuaded 21 content creators from different fields, to arrive at the city for 24 hours of an unforgettable experience. 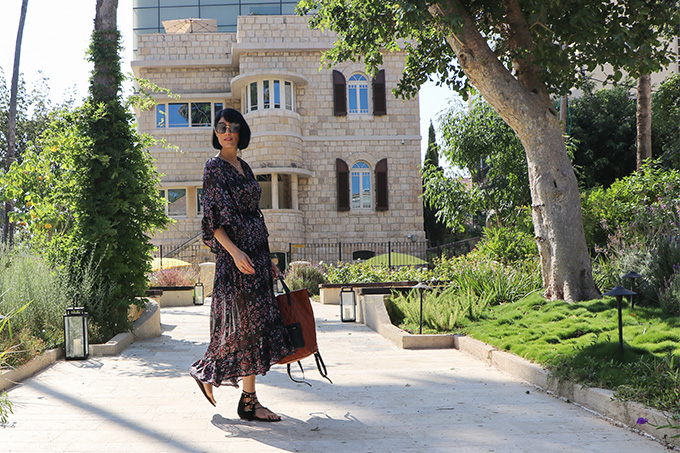 My visit started off with an exceptionally warm welcome at the Schumacher boutique hotel, which resides in the heart of the German colony, in a Templar building that was restored and preserved alongside a new building. The owner (!) – David Beeri, and  hotel manager – Moran Morik, welcomed us at the entrance with a big smile and an array of refreshments. 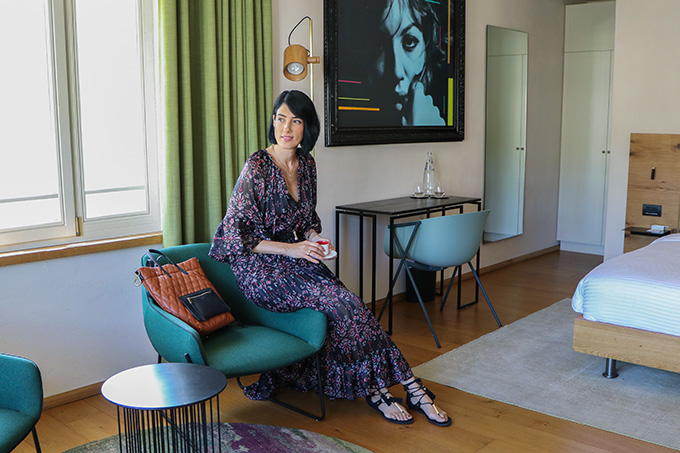 The unique hospitality experience and the gracious service were noticeable in every encounter with the two throughout the stay, starting with the hotel tour David gave us – including an informative explanation regarding the various artwork that is scattered in the hallways, and ending with the cocktails and delightful treats Moran stationed as evening fell, in the upper terrace. 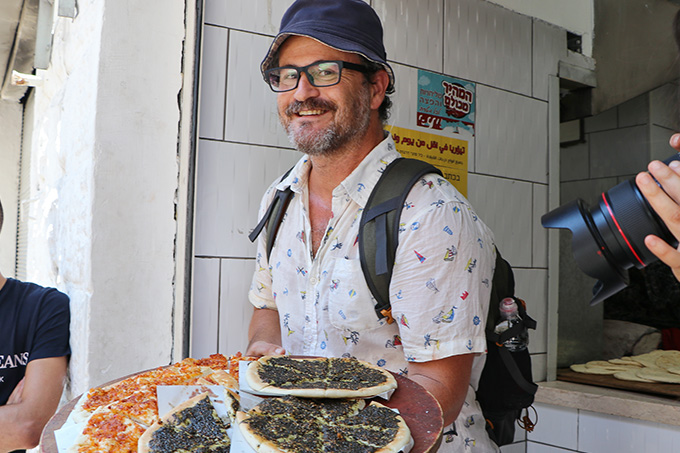 After freshening up in the hotel, we embarked on a culinary tour in Wadi Nisnas with the charming Sharon, AKA Haifa Shuk and cook. 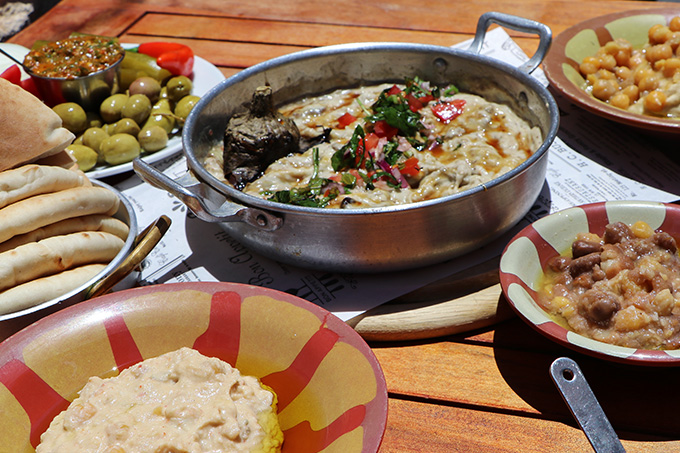 To those who aren’t familiar with Wadi Nisnas, it’s a neighborhood located in Haifa’s lower city. The neighborhood was built as an Arab neighborhood during the 19th century, and in many ways – has maintained its unique characteristic and identity to this day. By the way, “Nisnas” (نسناس) is the Arab name for a mongoose. 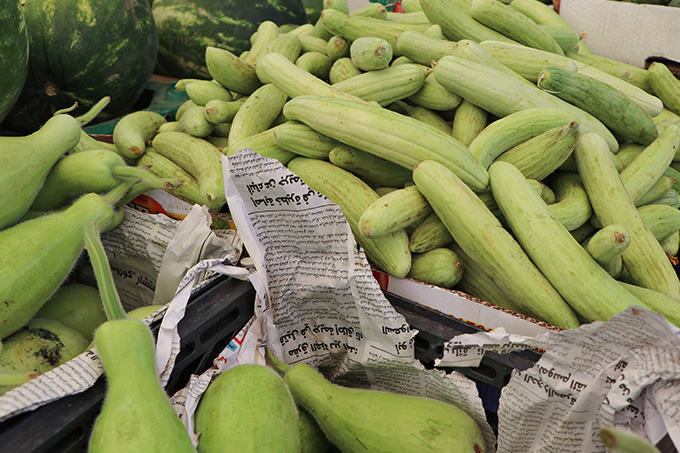 The culinary and cultural richness of the Wadi, along with the old stone buildings and the street art that’s scattered along the route, made the market tour intriguing, and the experience – extremely unique in the Israeli sphere. 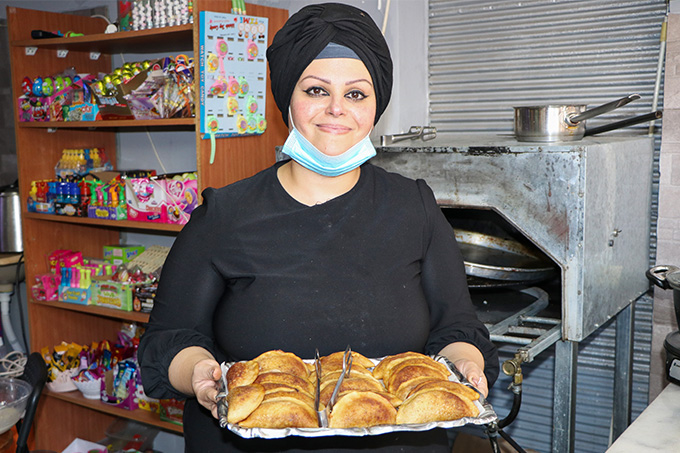 As to the food, Sharon (who’s a genius!) was wise enough to base the tour on Arab food “with a twist” – such as I’d never tried before – and on encounters with colorful and surprising individuals, such as Beautiful Fatma – who cooks traditional Arabic dishes for all of the restaurants and delis in town (and yes! She delivers), and Marwan Abu Shkara – owner of a boutique butcher shop and a carnivorous Instagram profile, a visit that reminded me of happy hour in Barcelona. 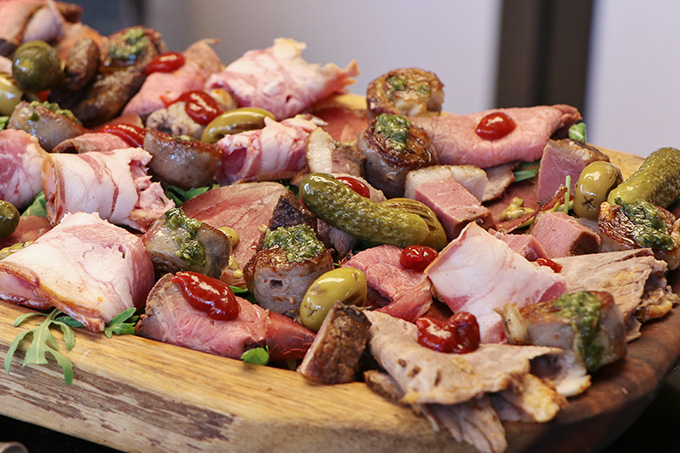 In the evening, we were invited to participate in a rare experience in one of the city’s landmarks – a unique tour in the administrative and religious center of the Baha’i religion, known as the “Baha’i gardens”.  The shrine of Bab – with its golden dome – and the Baha’i gardens, are a sacred place and a pilgrimage site of great importance for over six million members of the Baha’i community around the world, as the remains of their prophet are buried there. 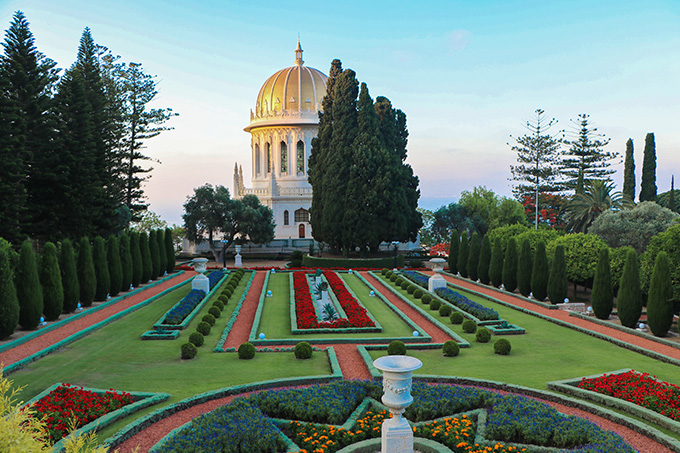 The gardens, built of 19 spectacular terraced gardens, that begin at the top of mount Carmel and end at its’ feet. In July 2008, the gardens were chosen to be included in a list of the UNESCO world heritage sites, due to their “outstanding universal value” for the believers. 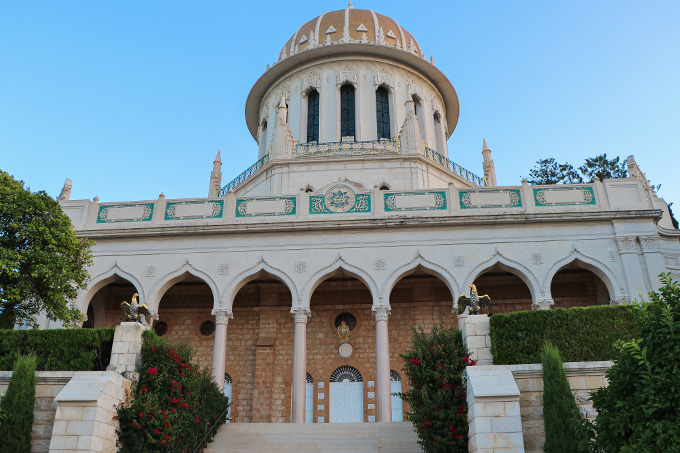 It’s important to mention that during this time, the gardens are still closed to the public out of concern for public safety. The tour was organized by the Haifa municipality, while maintaining the orders of the ministry of health. I’m hopeful that by the time this article is published, the gardens will be reopened for the public, and all of you will be able to enjoy a breathtaking botanical and aesthetic experience. 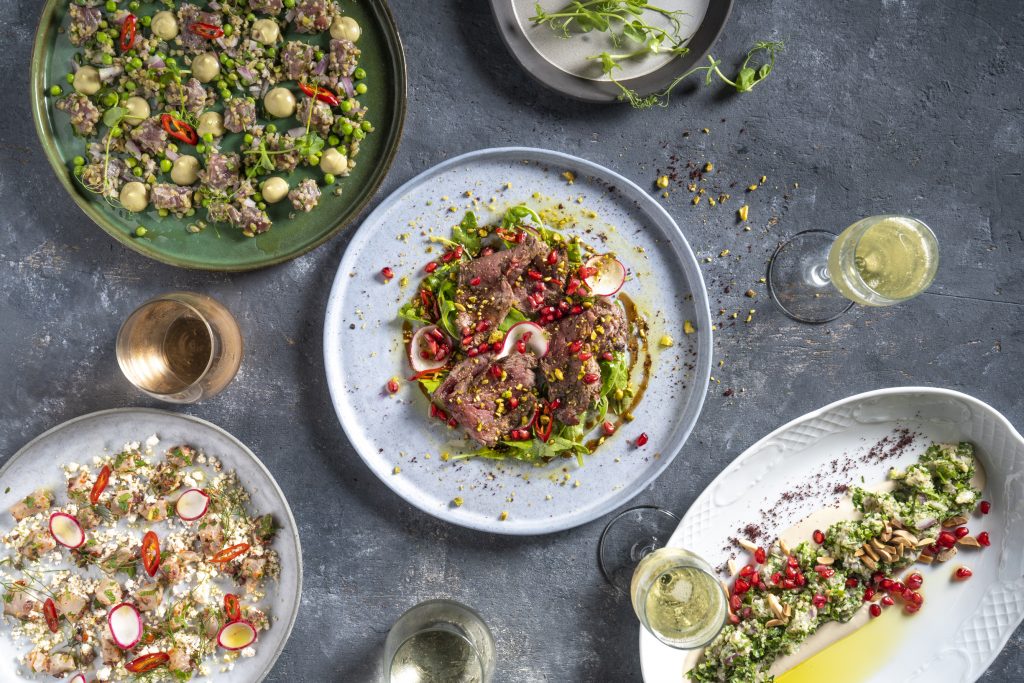 After we walked down all the steps that connect the shrine of the Bab – located in the center of the hill – to Ben Gurion boulevard at its feet, we felt that we rightfully earned our dinner at Lux restaurant – a local kitchen with a happy atmosphere led by chef Ala’a Musa, located on the busy Namal (which is Hebrew for port) street (yes, doubtful Haifans – the street is busy as if nostalgic hotspots such as “the Hurba”, “Maximus” and “ahotcha” rose from the dead). 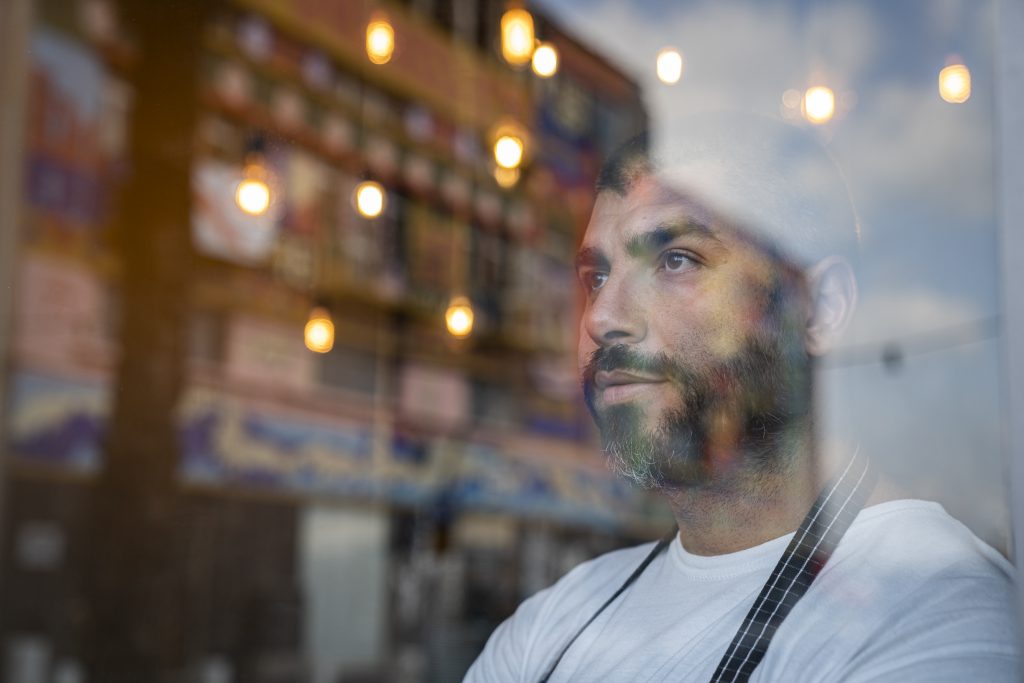 As we finished dining our delicious dinner, we continued to the decadent Knafeh de Lux and stuffed our faces as if there were no carbs left in the universe. But before I had the chance to say “Wow, there’s life in Haifa”! I found myself all over the divine knafeh, dreamy “Beirut nights” and the Malabi “on the house”… Good luck to me! ;-) 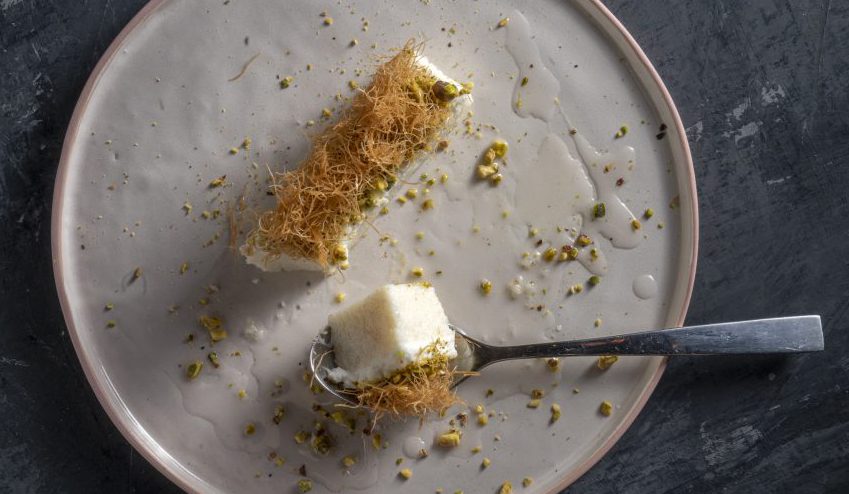 The next day, after finishing our breakfast at Shtrudel (any relation to the Austrian pastry is completely coincidental), we headed on the “magic of Haifa” tour led by Tomer Foux, in the lower city and the flea market. 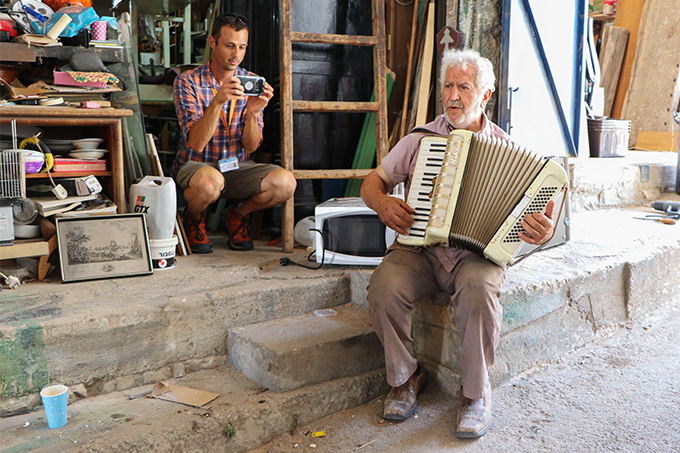 Armed with intriguing stories, charm and endless patience, amazing Tomer succeeded in connecting us to the unique Haifan state of mind – that characterizes the lower city – and to strike our curiosity, which extended our tour by an extra hour… Because we didn’t want to leave! 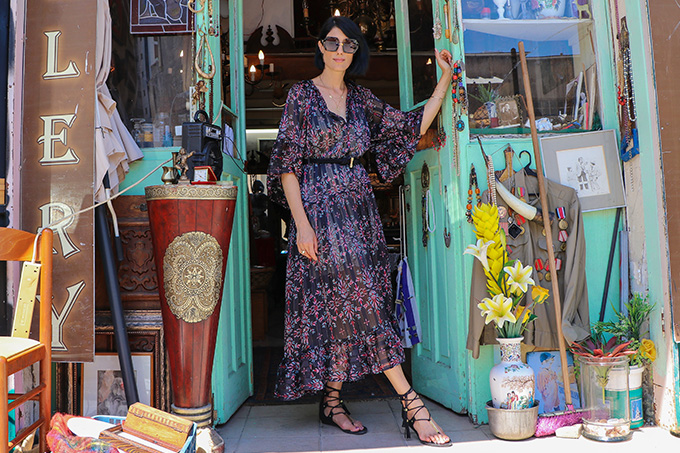 In the tour, that combines history, street art and of course – an introduction to the cheapest, most authentic flea market in the country, Tomer introduced us to inspiring individuals, such as Jamal Shechada from the House of Grace, who runs a unique prisoner rehabilitation program in a hidden church, Solomon the restorator that breathes life into old objects, Zehava queen of the market, owner of the costume and doll shop, along with many other great initiatives and ideas. I highly recommend it! 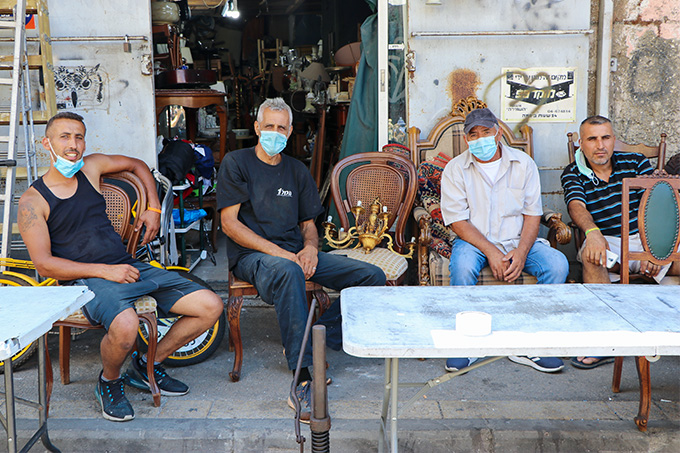 As you’ve probably gathered by now, our time in the city was filled with activities, experiences and left me wanting more. 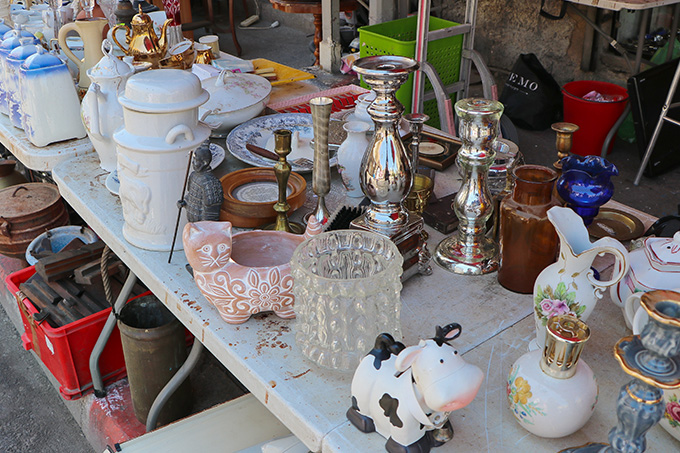 After hearing the responses of my friends, who took part in other tours and attractions offered by the Haifa tourist board, I recommend leaving your sarcasm at the door, letting go of any prejudice regarding Haifa as a sleepy blue collar town (I can’t believe I just wrote that. Shiri, what have you done to me????), and taking advantage of the closed airspace in order to get acquainted with Haifa and support the local businesses. 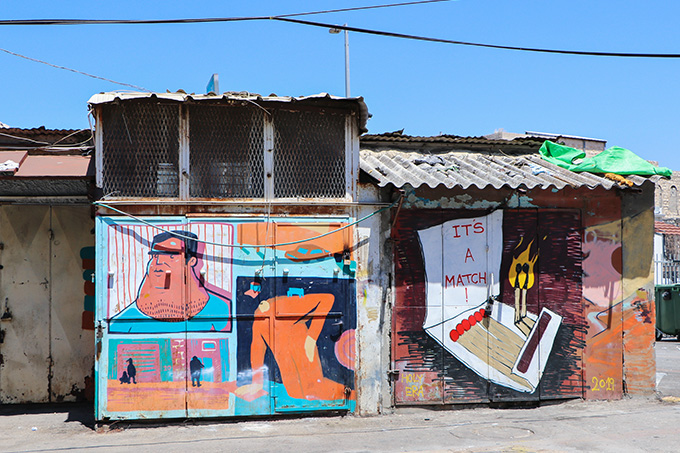 As to me, I’m convinced – Haifa woke up while I was sleeping ;)

Thank you Shiri for the initiative, the Haifa municipality for picking up the gauntlet, and the tour guides and all the wonderful people who served as such amazing hosts to our group. It is thanks to them that I’ve become such an enthusiastic Haifa ambassador! 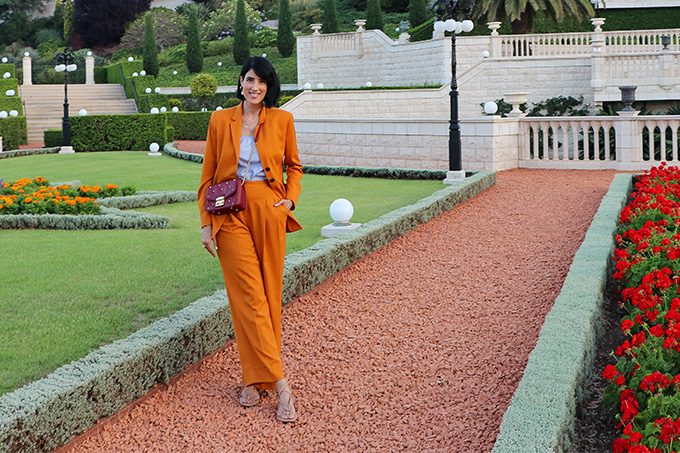 To download a booklet containing the lists of participating hotels, attractions and experiences – see provided link.

What did I wear? Israeli fashion, of course – 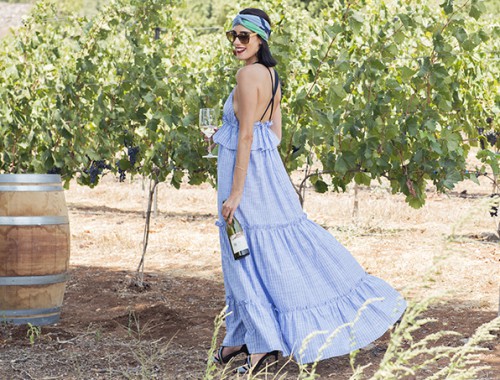 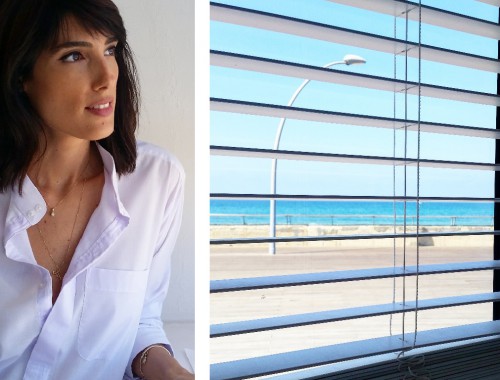 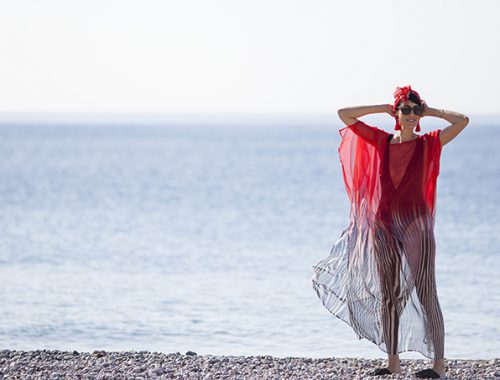